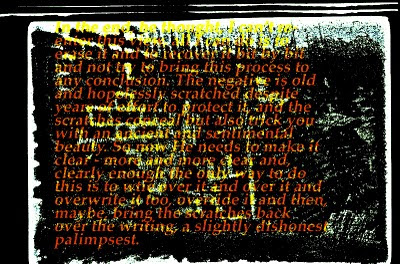 I suppose that I would never go out around the galleries, and lord knows I am lazy about this anyway, sometimes I do not even walk round the corner to the Whitechapel or Raven Row, were it not for the thrill of possible disappointment, which is more often an impulse to critical activity than is the comfort of canonical satisfaction. But that is not a rule, it's just that to acknowledge it, for me, gives a reason to go out. At the Whitechapel, just the other day, or maybe weeks ago, I was disappointed by Walid Raad's show, and this disappointment was one with the art world as such, no less.

Just the other day, after seeing Raad's show, I was walking down Praed Street on my way to Paddington and on the corner of Star Street which, even three decades ago, was once a scene of squalor and bottom of the heap prostitution - one could see the environment of some of Doris Lessing's early stories -, this happened, and it happened despite the cleansing powers of gentrification and, ironically, not a stone's throw from the Serpentine's Centre for Possible Studies:

A rather battered and basic red metal wheelchair was being pushed by a young man, seemingly down and out, and the passenger was a young black man, possibly in his 20s, with Down's syndrome, and not well at all; an older man, equally down and out, stopped the two as he came towards them and they exchanged some pleasantries, wild gesticulations and laughter. They seemed happy. One of those new 'mid-price' Bentleys - which have been legion since Blair and Brown fully unleashed the altogether other and viler squalor of bonus culture - suddenly found it could not mount the pavement to manoeuvre round a bus and the driver - for a moment - became a portrait by Francis Bacon or, rather Lovis Corinth (the better painter) This Bentley, I saw, was the Art World, in all its well heeled clumsiness, and I thought that it was also Raad's work in its confronting of the world we glimpse in it. This was an allegorical insight, and it concerned also a certain type of work that invites us not only to admire it  but to agree with it as well.

Or precisely this is what I found in the Whitechapel: and this having immensely admired and enjoyed Raad - Atlas installations here and there over the years; that I was expected to agree with it because it is concerned with conflict and admire it because of its endless reflexivity and self regard. A few years ago I set some first year art students a project to try not to be self-reflective/reflexive, and it had a high failure rate, more non-submissions than you could imagine, and this underscores now the way in which the reflexive in Raad is purely commodity, rather quaint and a little coy. In Adorno's terms, Kitsch, especially his reflections on being a successful artist. I don't mind that, artists being successful, up to the point where our involvement in their success makes us frightened to step out of the Bentley, for at that point art becomes a kind of blackmail.... an art of counter reformation, an art whose beauty, if the artist has another kind of luck, will not depend upon its messages. 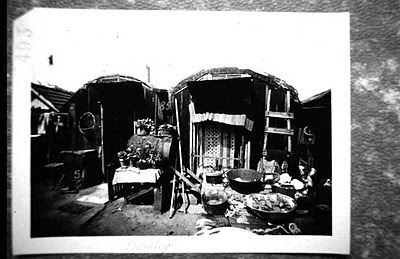 The archive, cabins on the Parisian Zone in 1942-43 photographed and numbered by the City authorities at the request of the Nazi occupiers - a fiction numbered - a life reduced to its nuisance value, not bare, just outside the fascist plans.
more to follow....


here is an image that shows an element of my own relation to the Middle East and Africa, it is a towel over a century old that I suspect one of my grandparents nicked while on holiday in Luxor ... they were natives of Alexandria,,, 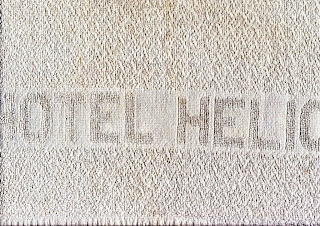