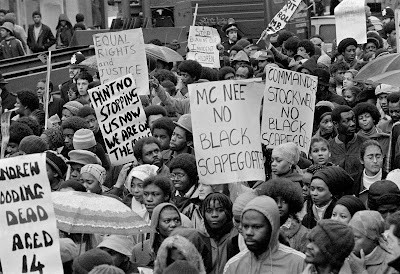 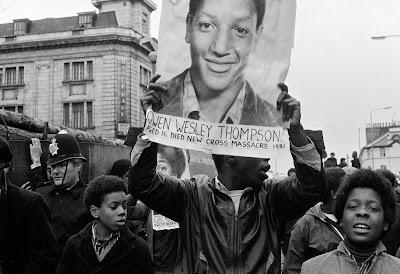 I am going to paste here the whole of the Goldsmiths publicity prefaced by some remarks of my own.

After the innovative use of some rooms at both Tates to show militant  or documentary photography of different kinds, from feminist issues to classic records of social difference, Vron Ware's work at Goldsmiths, done for Searchlight Magazine, raises some crucial issues concerning the interlacing regimes of aesthetics and politics as well as the matter of photography then and now.  It's a staggeringly lovely show.

Taken on an Olympus OM2, three rolls of 35mm film pushed to its contrasty limits to record - roughly speaking - action on gloomy conditions, these prints are beautifully made in silver gelatine and themselves push at and illuminate the limits of if an historic form of beauty, of seizing a moment of urgency, of singular beings and lives and their wanton destruction, through the quite exquisite showing of a voice, of London, in London, of its conflicts, in an immense power of movement.

All of this and more, constitute a fragile put terribly powerful form of modern beauty that, necessarily, is made in a way that places the subsequent unfolding of the digital image as a true embarrassment of 'riches'. I wonder, for example, about David Goldblatt's use of photoshop in his colour work, while thinking, rather, about the crafted intensities of Santu Mofokeng as a relation of Ware's figures (figurae, a technical term of rhetoric, I guess, meaning also something that we can touch and something that touches us). As this work does, and deeply, bringing to what, for many of us, is still an active memory;

this hitherto unseen recording of a history, the knowledge of which must be of great importance now;

at a time of renewed and renewable racism and the digital inconsequence of the lie;

and of living through them and against them, as well as we can.

From Goldsmiths site, with acknowledgement.

Exhibition video: https://youtu.be/ypfcqyj-FiM
This exhibition presents a body of photographs taken by Vron Ware documenting the Black People’s Day of Action on 2 March 1981. The images bear witness to an historic moment of community organising and resistance in post-war Britain.
In the early hours of Sunday 18 January 1981, a fire at 439 New Cross Road resulted in the deaths of 13 young black Londoners as they were celebrating the 16th birthday of Yvonne Ruddock, one of the victims. One survivor died nearly two years later, bringing the total loss of life to 14.
In the face of public indifference towards and negative media coverage about the loss of 13 young black lives, as well as perceived inaction on behalf of the police to apprehend suspects, hundreds of people met on 25 January 1981 at the Moonshot Club and marched in protest. The New Cross Massacre Action Committee was set up and plans were made for the Black People’s Day of Action on 2 March 1981.
Concern about racist violence had been running high in the area due to the active presence of the white supremacist National Front. Several racially-motivated arson attacks had already taken place in the Lewisham area. In that climate, it seemed likely that the tragedy had been caused by a firebomb – a theory advanced by the police in the early stages of their investigation.
In the face of a hostile media, indifferent to this tragic loss of young black lives, community activists called a meeting at the Moonshot Club on 25 January. Hundreds of people met to discuss the failure of Britain’s government to acknowledge the tragedy, as well as to protest against the inadequacy and bias of the police investigation. The New Cross Massacre Action Committee was set up and plans were made for a Day of Action on 2 March 1981. The decision was taken to demonstrate on a working day to maximise the impact on London.
Vron Ware’s photographs – never shown publicly before – document this historic occasion in vivid detail. While the images capture the defiant solidarity of the women and men taking part, they are supplemented by shocking evidence of the way it was subsequently reported by the Fleet Street press.
These photographs now form part of Autograph ABP’s permanent digital and print archive, curated for the collection by Renée Mussai in close collaboration with Vron Ware since 2012. They are shown here courtesy of Autograph ABP. We would also like to thank the George Padmore Institute Archives for the loan of the historical documents and the Heritage Lottery Fund who support the development of Autograph ABP’S Archive.
While best known for her work as an academic and writer, Vron Ware has also produced an important and little known body of documentary photography. During the late 1970s and early 1980s she was actively involved in feminist, anti-racist and anti-fascist movements, documenting campaigns as a freelance photographer and working as editor for Searchlight magazine from 1981-1983.


Seth/Tallentire at Hollybush Gardens, alas only up for three days

this extraordinary piece of work by Seth/Tallentire should be fought over by any and every contemporary gallery, at least from Dublin to London, and preferably beyond. Shown in a previous version at the ÉNSBA in Paris, the new installation seen at Hollybush shows something unthought of, quite in this way, concerning the peculiar relation between performance(repeatable), installation(also repeatable) and the singularity of the gestures that enable and accomplish both. A singular process of execution(s) that enable any one of the countless elements, from minor scraps of material to substantial videos that themselves re-re-present the parts as belonging to one another in a metonymy that is only arrested at the moment the artists stop work; but that is set in motion over and over in my own incapacity to decide either where to begin, or to end or how to just carry on. I hopelessly fall in love with individual colours or surface gloss, delay on scraps that hold my attention, or watch whole videos from the back of the monitor, listening, waiting for visibility to emerge with my movement, beyond parallax, into the space of signifiers, some of which have vanished with or as the authors. As a practice of the immateriality of material, this work is one to hold close, to memorise and to take away as thought. 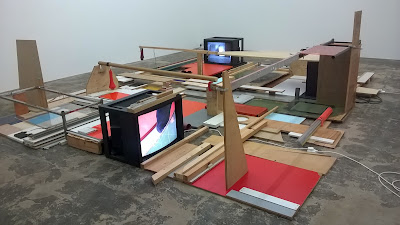 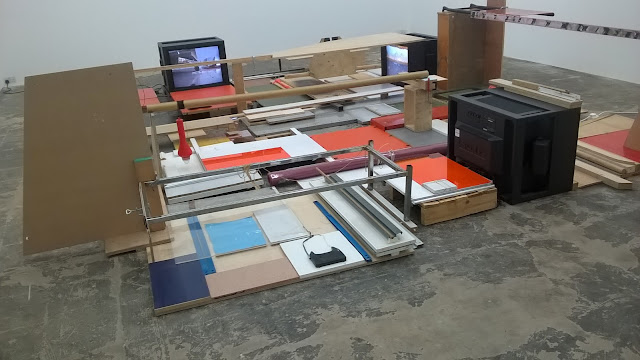 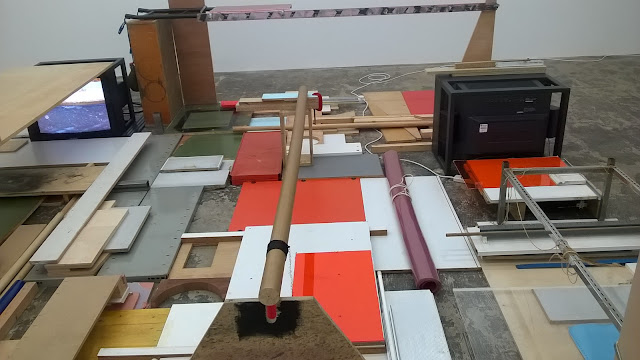 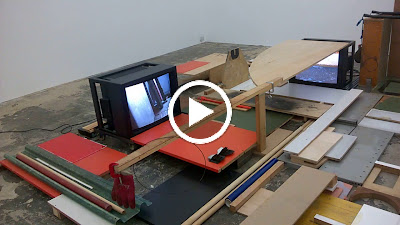 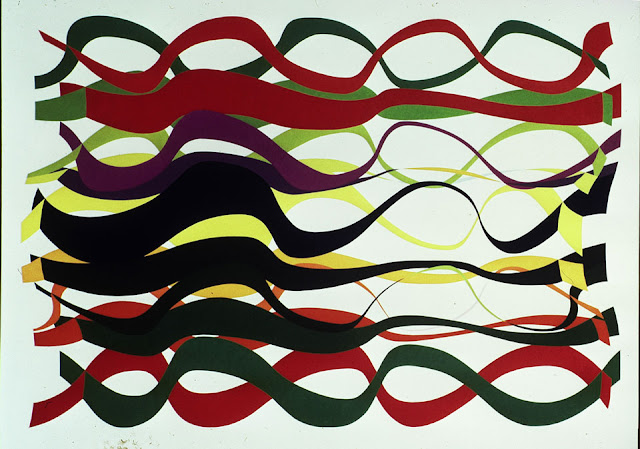 Nash, at Tate Britain, took all his life - I found out - to do without either rather schematic birds or war stuff in his skies. The last room was achieved in a new way, with some of the finesse of the first, the interim is rather second rate. Not the accomplishment of Ravilious in the end.
Posted by ADRIAN Rifkin at Sunday, March 12, 2017 No comments:

Went last night (whenever it was now, (last October?) to see/hear Paper Music at Coronet. Beautiful performance by two singers and pianist, rather classic semi-trash avant-gardist set up of the '70s with old vinyls on crummy portable gramophones, amplified spinning wheel, plucked piano strings - not the calm absorption of Tilbury playing Feldman, but a frenzied and hysterical excess of burglar alarm imitations, crooning and singing with eclectic piano scoring reminding one, overall, and from time to time of fragments of Zemlinsky and Eisler. The problem here is neither the performers nor Phillip Miller's interesting scores but the grand master of the moment in what I will, vulgarly, call the 'Visual Arts', William Kentridge. He no longer makes any work that does not have as its reference, its absolute presence and its sole indicated subject, anything other than