The jock pic is taken from the wonderful allkink.com site.
Posted by ADRIAN Rifkin at Tuesday, April 05, 2011 No comments:

Keeping Silent, speaking out : returning to the Paris Commune of 1871 when once again we need its lesson in democracy

This photograph can be dated to 1871 - 72 and it is a representation of a roughly painted mural either on a canvas or directly on the wall of the Buvette de la Commune in the suburb of Carouge in Geneva. It was made by Gaillard fils, the son of the revolutionary cobbler and head of the Barricades, Gaillard père, in the café that the father and son set up in their exile after escaping from massacre of the Commune in May of 1871. It was a means of making a living as well as a social centre for ex-Communards and other European revolutionaries. The Thiers government in Paris kept a police spy there who checked up on almost hourly basis on who was up to what, and to whom we owe the only full description of the interior and of the paintings that decorated it; the photographs and prints made after these that were sold as souvenirs.  The spy also made a description of the name sign - writing that each letter was made up of human characters showing an episode of the Commune - I translate here the stunning ekphrasis of the the first letter that is followed by a further four pages of a detailed and loving struggle with the image, signed with a flowing L X. When I trawled these archives in the Parisian Prefecture I think I was always entranced by his reports, but also stunned by the detailed international surveillance of the ex-Communards, whether in Geneva or in London (did they consort with Marx? was a question), from breakfast to dinner,  - something more intimate and more radical that the video cameras of our time

'B is formed of a red flag topped by a Phrygian cap, the pole forms the upright with a 'Fédéré' (communard soldier) standing upright, the flag is flying stretched out held in place by the bayonet of the 'Fédéré' and thus he completes the upper section of the B. The base is formed formed by another 'Fédéré', lying wounded on the ground, his feet against those of his comrade, his head leaning on the knees a canteen woman whose upper body is stretched upright. The standing soldier by the pole receives a bullet in his chest and stretches his arms out in a cross, the right hand holding a gun to which the bayonet is affixed in the folds of the flag, the left arm, slightly above the pole. As he is hit his upper body leans slightly backward as he begins to fall, and the canteen woman supports him with her right hand to his back while with her left arm she embraces the neck of the wounded 'Fédéré' stretched out at the base. It is in this position that the 'cantinière' forms the lower loop of the B'. 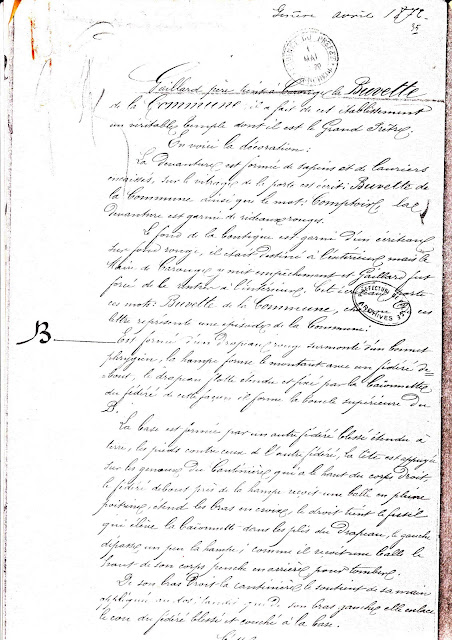 Even the most recent scholarship - in its absurdo-empirical form as practiced in France - has treated these images as lost, which is a pity as, apart from his brilliant cartoons, that have appeared in many books on the Commune, they make for what was perhaps the only substantial oeuvre of pictorial work by a working class militant and amateur artist of the nineteenth century - the the sense that Marx gave to being an artist in The German Ideology, someone who, amongst other things, paints....

I did find these images in the mid 1980s in the Bibliothèque Publique et Universitaire of Geneva, not surprisingly buried in albums of the Perrier collection - a vast collection of memorabilia and books made by this sympathiser of the Commune. In fact Perrier had acquired the whole decoration the Buvette at the end of its short life, and gifted the lot to the Musée Municipal d'Ars en Ré. his home town - which dispensed with it by public auction on 1929. End of the story until this! Or these, this collection of damaged and decayed little images that mark a singular enunciation of the I as worker, I as artist, I as revolutionary - an enunciation that shifts the visibility of all these three words into the space set out by Jacques Rancière as that of the 'rêve ouvrier'.

Lacking, I suppose, morality as a scholar, or a sense of public duty, I decided that I would keep my secret and it's only the last couple of years that I have begun to divulge it. I will post a Gaillard fils iconography here in the next few days.


So here, to follow, is a very bad scan of two cartoons, one of Thiers as the head of a venal, capitalist government, worshiped by the rich on an altar of luxury food, the other of the last struggle of the Commune. The red flag of the Commune is flying against the wind that blows back the smoke of the cannons, as if the smoke itself were a defence against the distant silhouette of Versailles with its murderous troops,  and at the same time the figure of the effacement of the Commune that Gaillard, in exile, will struggle to overcome. Aporia and oxymoron ... affect beyond the possibilities of a satire or the run of the mill cartoon - something that occurs and reoccurs in militant imagery, almost despite itself, as a surplus of the militant act itself.. 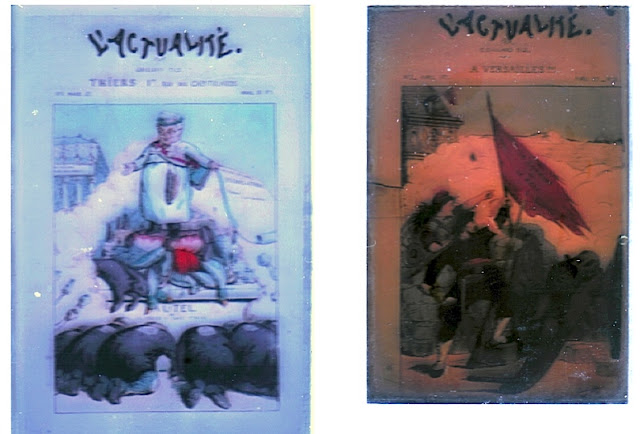 And here is a cover from an ephemeral, political broadsheet that he ran during the club movement of the end of the Second Empire - see Rifkin, Thomas and Moore, 1987, 'Voices of the People' for an account of this. Minck ( he spells it wrong I guess), an early feminist, was a writer, orator and revolutionary who, amongst other things, thought that young men should not waste their energies a shop assistants - of which they formed the vast majority in 1867, but that this work should be made available to women. When I started work on Commune I was advised to look for this by the great communist scholar and historian of Communard women's organisation, Eugene Schulkind, but firmly told not to take it too seriously. This was typical of the communist historiography of the time, little apt to take on the effects of an E P Thompson, and ever rather scornful of whatever could not be taken as a true exemplar or ancestor of a virile and modern, industrial and revolutionary class. A cranky shoemaker and an effete poet son were not at the height of things and behaved with little of the nobility of self-sacrifice that is ever the attribute of the dead.  Needless to say I took it all far too seriously, and so I did find a lot of stuff in Geneva which, I the realised, they did not want to know! 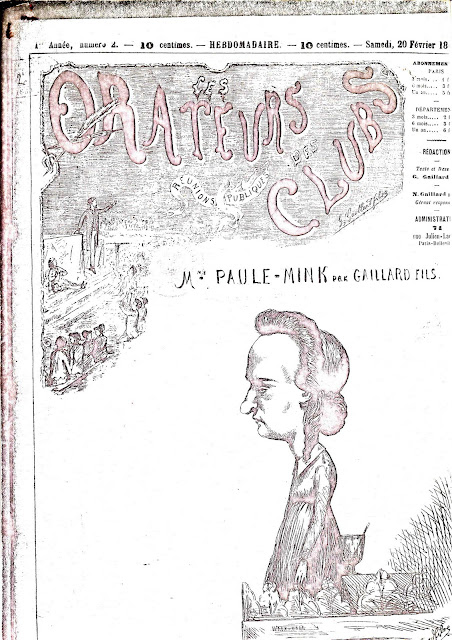 And now the frontispiece and rear cover of his poetry written for sale at the Buvette. 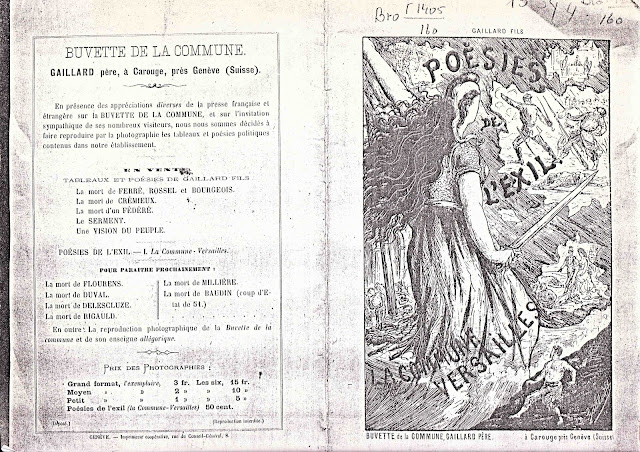 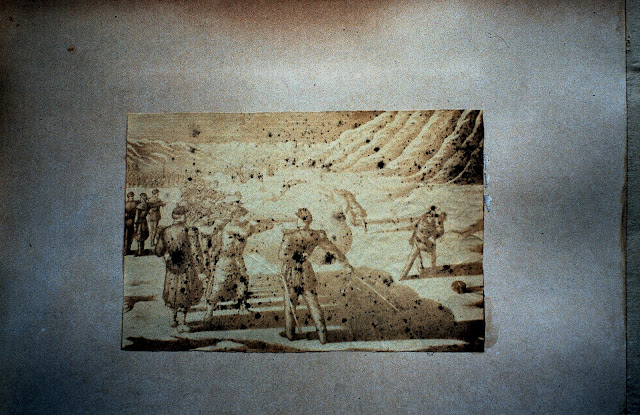 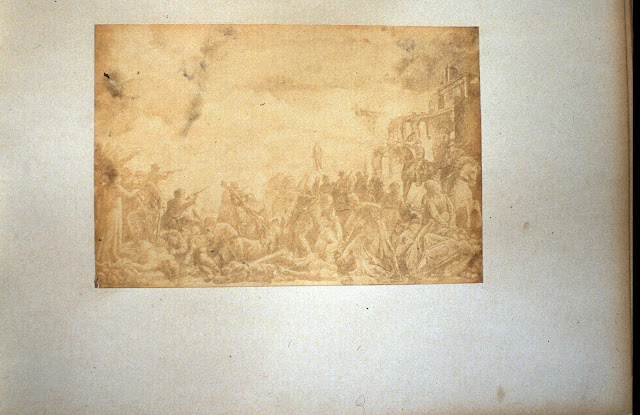 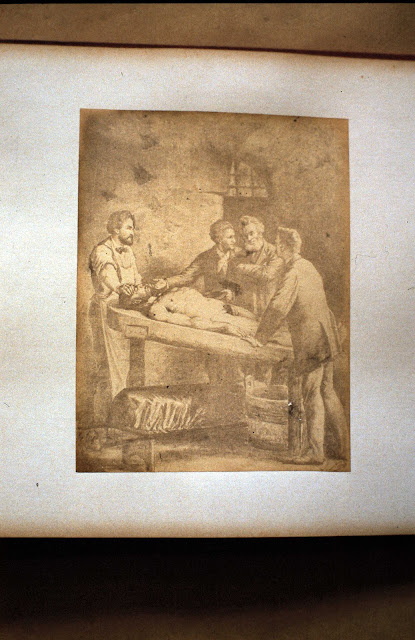 Posted by ADRIAN Rifkin at Saturday, April 02, 2011 No comments: