Since writing the below I bought  Simenon et Maigret passent a table by Courtine, which changes everything - there is no need for any sentimetal reflection on this barbaric, revolting and indigetsitble period of culinary history as we find it in Mme Maigret's cooking, that of the Maigret's friend the Dr Pardon or the Brasserie Dauphine. Mme M, Simenon remarks in one story, has nothing to say in the vening as nothing interesing has happened to her during the day!! Depressing but gripping nonetheless.....

There is a lot more to say about Walid Raad, see previous post, and about the commodity form in progressivism since Documenta 11, but my main activity throughout 2010 has been reading in their entirety Georges Simenon's Maigret novels and novellas: I am currently about 6000 pages through nearly 10000 and it has been an unalloyed pleasure, which does not mean without contrariety, as well as a framework for repositioning ideas about the visual. But for a kick off here is a picture I made in 1959 of the bird market in Paris, Ektachrome slide, 6 by 6 cm, Rolleicord VB, digitally restored: 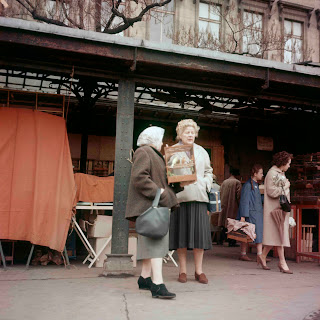 And another of the Quai more or less opposite Maigret's headquarters: 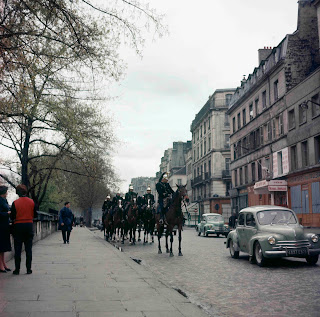 These photographs illustrate some attachment of mine to the city which, despite my being very tired of Paris-as-such, enables me to engage Simenon with great gusto, and to move from having read a few of the novels, some of them such as Pietr le letton very carefully, to taking my time over all of them.
I carried on making what became hundreds of pictures of Paris from the 1960s to the 1990s when the terminal modernisation of the 19th, 12th and 11th Arrondissements and their once complex combination of ancient street plan and density with friche, together with the birth of digital photography, killed most of the interest that I had in the city and in photography as well. I will put up some of these in due course, but suffice it to say that reading Simenon, the Parisian and the provincial stories, reactivates this imprinting of my images in myself, and not as nostalgia; rather, as a reactualising in the here and now, sufficient to this process of reading and not to a generalised and unproductive melancholia.
Today I was yet again taken aback by the complexity of Simenon's embededness in his culture and how his attachment to Maigret enables him to construct some kind of a hermeneutic of change and stasis, of the enigmatically complex relations of persons and things. This was at the beginning of the 1950  Les mémoires de Maigret in which Simenon put's into his creation's mouth a first person account of his being written as a character. In a sense it is an autobiography of Simenon in his role as Maigret's author, shifting from an arrogant but disingenuous timidity in facing his creation to a blatant arrogance and finally a fond intimacy - the intimacy of a certain introjection, the moment when Maigret notes that it is Simeon who dresses like Maigret rather than being his dresser, so as to speak. It's an object lesson in the elaboration of obsession, one that throws some light in my own with the artist J A D Ingres. But Simenon's simple gesture of pretence, of suspending the suspension of fiction's truthfulness, is stunningly disarming. It works almost too well, as if one is thrown into a day dream.
And, seen from one angle, that of Mme Maigret who becomes a reader in her reading of the novels as they appear over thirty years, I came to realise that the perfect reader was always and already she, in her imagined intimacy with her fond but ever absent spouse. She defends Simenon against Maigret's waspish discontents with his construction; you could say that her behaviour elaborates the reader as a bride of the text. Curiously a space of Barthes' writing begins to appear in THIS literature a decade before it began to appear in his own.
I think I might write Mme Maigret's  cook book, unless someone has already done so, but it would encourage an epidemic of acidity if widely used, it would make Delia Smith read as a crash diet. 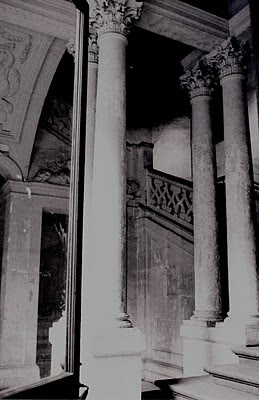 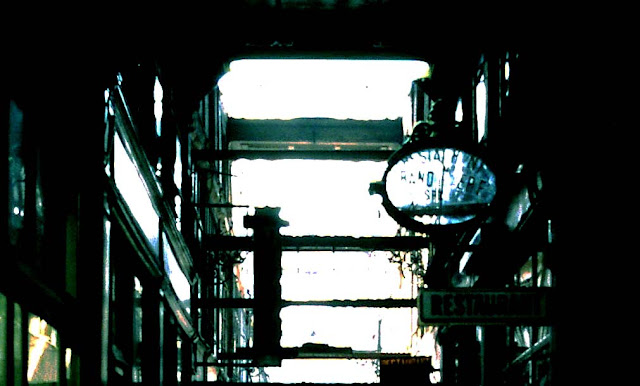 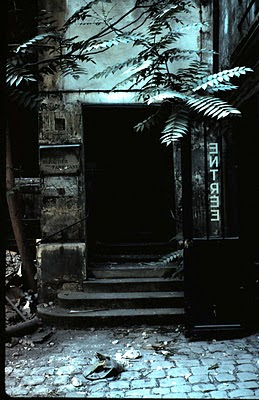