Once again on Blasphemy 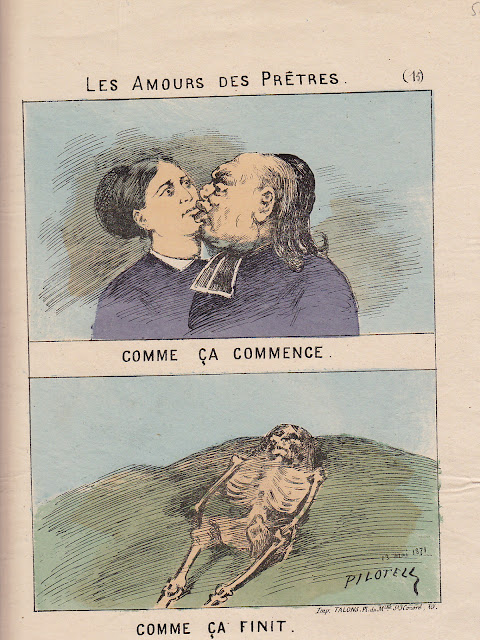 In the heat of the discussions, if that is what they are, around "The Innocence of Muslims' ( I have watched it on Youtube and it reminds me of 'The Life of Brian' in such a way that I wonder if that could now be made, just as I wonder if Jack Clayton's great work, 'The Innocents' could any longer survive its Jamesian finale of sexualised and evidently abuséd childhood. Actually it is gratuitously rude and the product of a provincial regression to adolescent fears and fantasies so extreme that it could only come from someone in the Tea Party or planning to give money to M Romney. It's a pity anyone has lost a life over it, dogend of yanqui imperialism.

Above is another cartoon by the great Pilotell, from the period of the Paris Commune, 'Les Amours de Prêtres', a series dealing with the much publicised discovery of a large number of female skeletons in the church of St Laurent - giving rise to the idea that for years the priests had been seducing and then killing nuns and novices - as fine an anticlerical fantasy as I know, and, as it happens, one that, even if it were not true of the time, was to be prophetic. The catholic church in Ireland, Australia, Italy, here in the UK, wherever, has acted out this 'insult' as if it were a prescription for future performance.

So it is just as well to recall the Woman taken in Adultery, the question of the first stone, and the rather wonderful art that this parable was to produce! Here is a Poussin for a start, so let's think, this is today's lesson, folk, that Poussin and Pilotell have more in common than you might have thought! 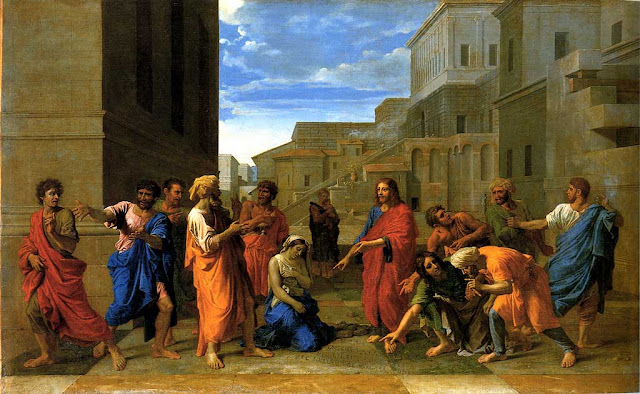 By the way, the writing in the dust is a red herring laid by Jesus in one of his more Pasolinian moments.
Posted by ADRIAN Rifkin at Monday, September 24, 2012