Making do with power point, or the poetics techno-bêtises 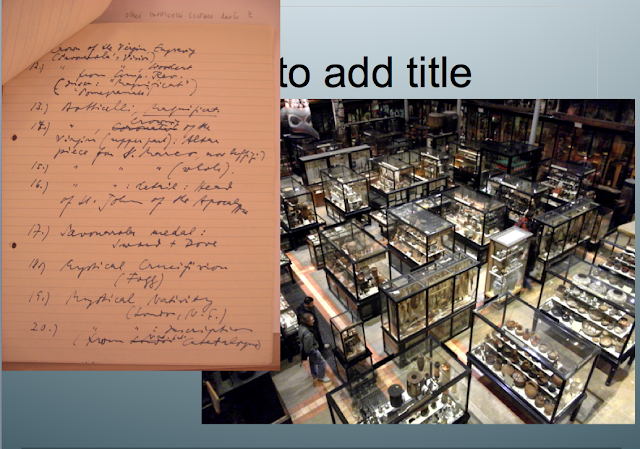 Recently I have been working with almost extravagantly complicated power point presentations that, nonetheless, I hope, have little to do with multi-media or son et lumière or disco balls; rather attention, attending to, a co-attending of me and the listener viewer, speaking and hearing over and under, loosing control a bit. The idea - of course - is to build on the notion of the Mnemosyne atlas as a road map rather than as a prompter of voluntary or involuntary memory, maybe a map of future yellow bricks, with some kind of a surprise near the end, or just a predicted outcome that I have struggled to bring into visibility, or at least justify in its being seeable.

Above you can see an overview of the Pitt Rivers museum in Oxford, a museum of the iterable and infinitely differentiated samenesses of human gestures, pouring, blowing, scraping, squeezing, attending (to) and so forth. Next to it is a page from the Edgar WInd Archive, to be found in the basement of an adjoining building, part of his slide-lists for his last lectures on Botticelli's mysteries, given in 1965. The trace of a rhythm of slide and voice, clunking, fanning, speaking, as the pieces are shifted here and there in the arguments until a magical Botticelli appears, a man who believed in the equality of humans and angels. Oh, sublime heresy. In a way Wind adopted the posture not of his teacher and colleague, Aby Warburg, but that of the Pueblo Indians in Warburg's Serpent Ritual, who danced for rain --- When Wind danced, it poured, sympathetic magic and pragmatism flowed together. 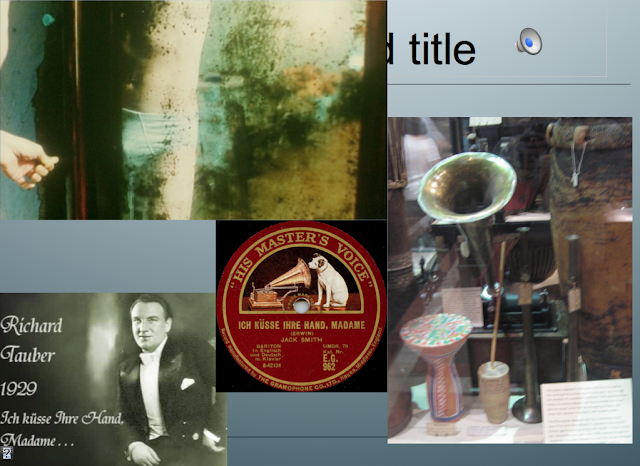 And here, above, a little icon suggesting the presence of Wind's voice in his Reith lectures (I will get all these things up in time), which can overlap with that of Richard Tauber and the strange, other exile of two gay boys in Buenos Aires at the beginning of Happy Together, and, in Pitt Rivers, our attending to history's sounding in the silent vitrine.

Here is a download from you tube, a fragment of Sally Potter's Tango Lesson, beautifully in Italian (oddio), which also entrains the juxtaposition of images in mimicry and invention:
...... while here is a loop
of one of JS Bach's
canons on the left
hand of the opening
of the Goldberg Variations, which I take as a guide to action, if ever we thought going forward and backward were an easy thing to undertake.
This is what I mean by theory......... But now I am showing my shows like comic strips, and I stay silent.
Posted by ADRIAN Rifkin at Saturday, April 06, 2013 No comments:

Things are not what they used to be .... 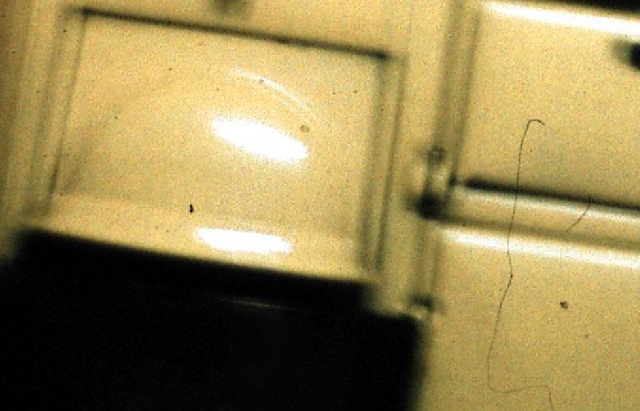 Posted by ADRIAN Rifkin at Saturday, April 06, 2013 No comments: